“Supersuckers’ infectiously groovy approach has always combined ’50s rock’n’roll high-school naivety with Cheap Trick-style ’70s hard rock snap and biting punk energy. Get The Hell carries on this tradition. Eddie Spaghetti and his gang want people to smirk as they hit the dance floor to Something About You, Fuck Up, Bein’ Bad and Rock On. These have the same unpretentious thrust of The Wildhearts, Hellacopters and Turbonegro, but with the flavour of the Rocky Horror Show. Each song is a charming, fumble-in-the-back-seat anthem. Nothing here lasts more than about the three minute mark, with everything bouncing about with a disarming zest. Once you’ve devoured this album, you’ll be a sucker for the pretty tunes, ones offering a quick snack, rather than a banquet. Isn’t that the way rock’n’roll should be?”
Malcolm Dome, Classic Rock Magazine

“Ain’t getting any smarter listening to the record… But it fuckin’ jams.”
Pop Matters

“Get The Hell is the best thing since their 1990s heyday.”
Audiohpile Audition

“…my first reaction upon hearing ‘Get the Hell’ is relief that the Supersuckers still don’t suck.”
Innocent Words

“The Supersuckers are probably the best rock band to never get widespread attention. The Seattle-based band has spent two and a half decades on the cusp of next-big-thingdom, without ever crossing into mainstream success. The reason for this seems fairly obvious. The Supersuckers bow to nothing – not money, not fame and certainly not the fickle whims of the music industry. Instead, the band crashes into 2014 with Get The Hell, a loud, punk-fueled platter of distortion that reminds fans exactly why frontman Eddie Spaghetti and his brothers in arms are the tonic rock music needs to remain vital and dangerous.
Metal Forces Magazine

“If you worship rock n’ roll as a religion like I do, then The Supersuckers are like your Moses. When they say they’re the world’s greatest rock n’ roll band, it’s hard to think of anyone else worthy of that title… Their new record, Get the Hell, is more evidence that they deserve their crown… To simply put it, The Supersuckers are the greatest. ”
James Orme, Slug Magazine

“The 12 tracks on the band’s latest album serve up a dizzying array of tales of life in the fast lane that are so sizzling you can practically smell the burning rubber left behind on the asphalt.”
Seattle Times

“It’s hard to quickly find that record that’s going to define rock and roll in the new year. Unless the year is 2014. And that record is Get The Hell, the newest release from Supersuckers. The greatest rock and roll band in the world…”
punkmusic.about.com

“2014’s Get the Hell, the Supersuckers’ ninth studio album, is a solid blast of swaggering, amp-stacked rock & roll, as loud as anything they’ve unleashed since 1995’s The Sacrilicious Sounds of the Supersuckers…”
allmusic.com

“The Supersuckers do what the Supersuckers want and that’s about it. The songs sound excellent, the playing is immaculate.. but never is it not good enough. Long live the Supersuckers and long may they make rockin’ records like this. I know it’s only rock and roll but I like it!”
Uber Rock

“Spaghetti and company in crackling good form, you’ll be nodding your head and raising your fists.. Get The Hell is focused on boots kicking, middle fingers raising, and singalong anthems sure to please the most jaded of music fans.”
High Wire Daze

“Hard-rock of excellent workmanship, fast and well played, combines the attitude of the band to make pieces with powerful riffs and choruses. Everything not never drops of tone and listening remains fluid from start to finish. Recommended to lovers of fast guitars and good music.”
Italy’s Rock Rebel Magazine

“Big, catchy Supersuckers riffing at its very best; all punk rock crash and rattlesnake winding lead breaks that crackles more than a fetishist in a nylon factory… You need it in your rock ‘n’ roll soul sonny. Grab a beer, grab a partner and get the fuck on the dancefloor, Supersuckers are back. Hell yeah!”
avenoctum.com

🌵 Flagstaff, AZ tonight at @yuccaflagstaff then

#repost • @metalmartyofficial Got the tools for

This one is just about sold out. The others are mo 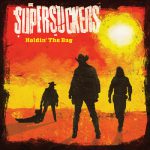